It feels like it has been forever since I've read a non-fiction book and I'm really glad that this was the one to break that dry spell. 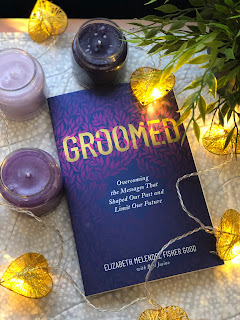 Someone in your past sold you a false story about who you are and what you’re worth. It has been holding you back for too long. Take control of your future.

A staggering one out of three women in America was a victim of sexual abuse at some point in her childhood. No matter how many years it’s been, if that’s your story, those scars are probably still with you. But even if that’s not part of your story, this book is for you. Women today have been groomed for a lot more than just sex.

Using her own story of abuse, family tragedy, and rebellion, Elizabeth Melendez Fisher guides readers toward an understanding that grooming is oftentimes subtle, but it’s always life-altering. In Groomed Fisher incorporates the language and lessons gained over the past decade working with sex trafficking victims and her work in ministry and counseling before that. She draws out five specific ways that women have been groomed, from physical appearance to spirituality to finances, and shows how those manipulative messages have affected the way we see our worth and how they’ve oftentimes stifled and limited us. From there Fisher offers readers a way to overcome their past, starting with the all-important but rarely explored idea of a selah, or a time of rest and reflection, and exploring active ways to forgive and move forward to a new level of freedom.

No one has to be defined by her past. No one has to live for her groomers. It’s time to take a look back at where we came from to escape the messages of our past and take control of our future.

'What was your first secret? You know, the thing in your past, probably in your childhood, that forever altered the way you understood everything? ...
...The memory of your first secret probably still stings, even after all these years. It's not pleasant to talk about. Perhaps someone warned you never to talk about it. Yet it's never far away. It reaches into your life now. It comes to your mind when you're alone, without distractions."

Those passages happen on page 5 and its how I knew I wasn't ready for this book. I wasn't ready for it to be the gut punch that it was. The truth is I do have a secret. I have several, actually, but I have one that I think about every day. When I think of it, it plays out in my head as if I'm reliving it all over again. I have never talked to anyone about it except for my therapist because at 30something years old I felt like I had to tell somebody. Somebody who would believe me. Somebody who would understand that it was trauma, that it will stay with me my entire life. It's why I'm standoffish with men. I'm a bit of a bitch to them if I think they are interested. I have to head them off at the pass. The only exception would be with Matt, I felt like he would be OK, but there have definitely been times that I felt not nearly as experienced and felt like I was in over my head.

So I say nothing. My entire life it was always ingrained in me to not say anything. Nobody will believe you, what are people going to say, you're going to make me/us look back, there are always consequences for saying stuff like this, people have their own problems, what good is it going to do?

I think about the boy who gave me my secret a lot. I only know his first name. I wonder how he turned out. I wonder if there were other girls. Was I the first? He wasn't much older than me so where did he learn that? Of course I'll never know but I think of it often. Part of me wants to know if anyone else knew but a part of me doesn't. I would hate to think people knew and didn't do anything. But I know after all of these years it affects me all of the time.

Anyways. Though this book isn't long, it is just over 200 pages, it is a really fast read and you'll be glued to it. You will identify with a lot of it because through the author's very personal stories she explains grooming and how we are all groomed in some way. Most of it we don't even realize and looking back in hindsight is startling to realize how close we were to someone who didn't have our best interests in mind. It isn't even just sexual abuse, it can be as simple as the way we handle a crisis. Maybe you don't step in when someone could use help because you're taught to mind your own business. Maybe you are in a not so great marriage or relationship because you have someone telling you to just deal with it, "think of the kids", "nobody will love you like I do",  "you can't afford to be on your own", "at least you have some control on how he treats the kids if you're there", that kind of thing. Those messages groom you to believe the treatment you are enduring is ultimately OK.

The author talks about the skill of learning to identify these messages and reconciling the reasoning behind them isn't about you. That your feelings are above those and you gain power by rejecting that behavior.

I really, really liked this book and I found myself re-reading passages and having to take a break to think about it and try to understand my past traumas in a different light. It makes you understand the sex trafficking epidemic, how these kids fall into this and how incredibly skilled these predators are. They really don't have to do anything nefarious, it's just specific, guiding comments that can alter the frame of mind of a child so easily. It's pretty scary as a parent but it also helps you how to stay connected with your children.

I have to give this one 5 stars because I enjoy a non-fiction that I can connect to personally.


A huge thank you to W Publish Group, Thomas Nelson, and TLC Book Tours for having me on this tour and sending me a copy for review! All thoughts are my own, and this post contains affiliate links.

Hi Lambs! Thanks for commenting- I read them all, no matter what. If you want a reply- please leave your email addy on here so I can do that. Email me at sarastrand9438@hotmail.com if you want to be best friends.